Tim Considine, best known as the famous Disney actor in the 1950s, and as the older brother in the hit series My Three Sons, has died at the age of 81.

The veteran actor passed away at his home in the Mar Vista neighborhood of Los Angeles on Thursday, March 3, in the midst of his family.

His death was announced publicly by his son Christopher Considine, then shared on Facebook by My Three Sons co-star Stanley Livingston. 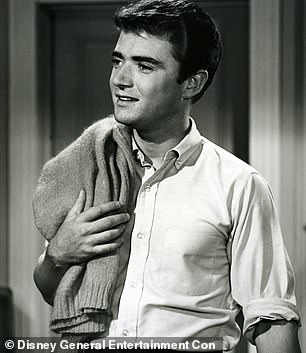 RIP: Veteran actor Tim Considine passed away at his home in the Mar Vista neighborhood of Los Angeles on Thursday, March 3.

“I just want to say how sad I am to learn that my older friend and surrogate older brother, Tim Considine, passed away yesterday,” wrote Livingston, who played Richard ‘Chip’ Douglas during 12 seasons of the sitcom.

On screen, Tim also played my older brother Mike in My Three Sons. Tim and I have been friends for over 70 years.

He ended the post with a post, “Our hearts go out to his wife Willie and son Christopher – and all the Considine family. Tim has gone through life his way! He will be missed by everyone who knew him. I love you brother… RIP!” 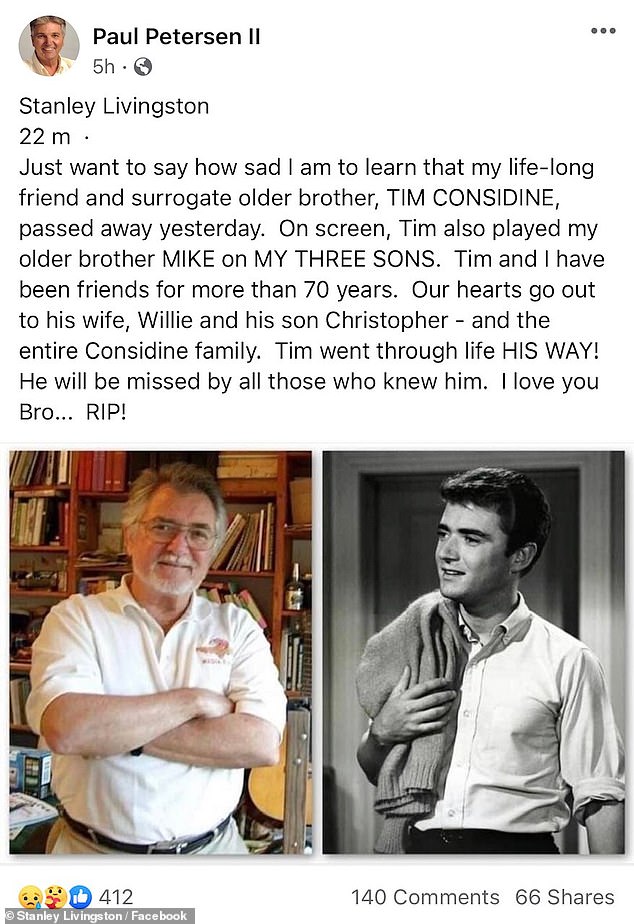 RIP: My Three Sons star, Stanley Livingston, shared a touching tribute to Considine on social media, a day after his death 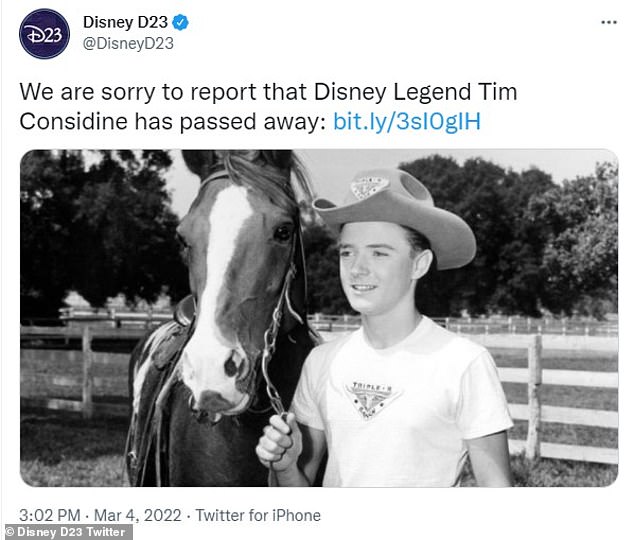 RIP: Disney paid tribute to Considine in a Twitter post on March 4, the day after his death

Born into a show business family, his father John Considine Jr. was an Academy Award-nominated film producer for Boys Town, while his mother was the daughter of theater magnate Alexander Pantages, whose empire included the famous RKO Pantages Theatre, built at Hollywood & Vine in Hollywood in 1930.

Arguably Considine’s most famous acting roles as a young teen were on Spin and Marty, and later in the 1950s on Hardy Boys, both of whom appeared as 15-minute segments on The Mickey Mouse Club.

After more than six decades of these roles, Disney has taken to social media to pay tribute to Considine, writing in a Twitter post, “We regret to report the passing of Disney Legend Tim Considine.” 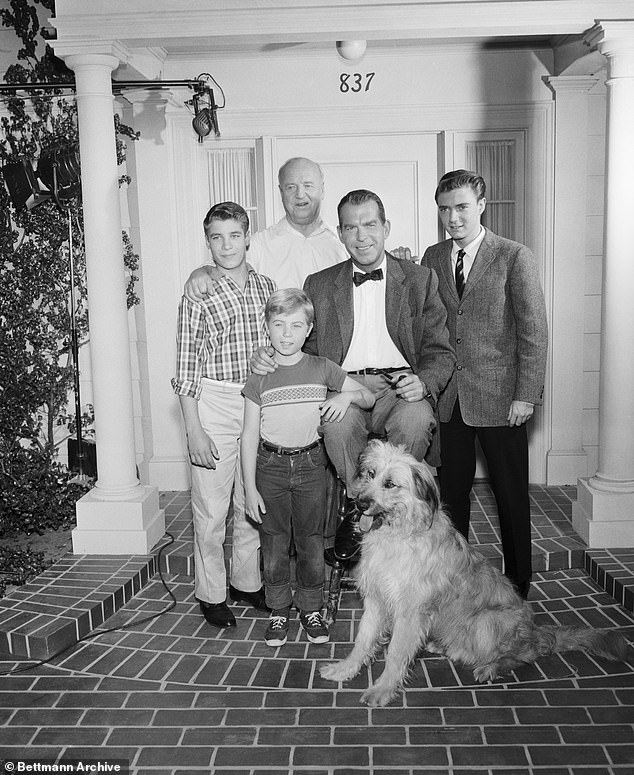 Outbreak: After success with Disney in the 1950s, Considine starred in My Three Sons from 196 to 1965, though the show ran until 1972; Pictured right with Don Grady, Stanley Livingston, William Frawley and Fred McMurray

By 1960, Considine scored the role in My Three Sons, a series about three siblings raised by their widowed father, played by Fred McMurray, that turned out to be a huge hit.

He played the role of Mike Douglas from 1960 to 1965 before leaving the show to pursue other opportunities. The series would run until 1972, ending after 12 seasons.

His film biography began with the drama The Clown, starring Red Skelton and Jean Greer, and included the likes of Her Twelve Men (1954), the comedy The Shaggy Dog (1959), and most notably the epic biographical war film Patton (1970). The epic war biographical film won seven Oscars, including Breast Picture, Best Director, and Best Original Screenplay.

The actor has excelled behind the camera as well, writing television episodes for NBC. He has also published books and written a guest column for The New York Times Magazine.

Considine leaves behind his 42-year-old wife, Willett Hunt, and their son, Christopher. 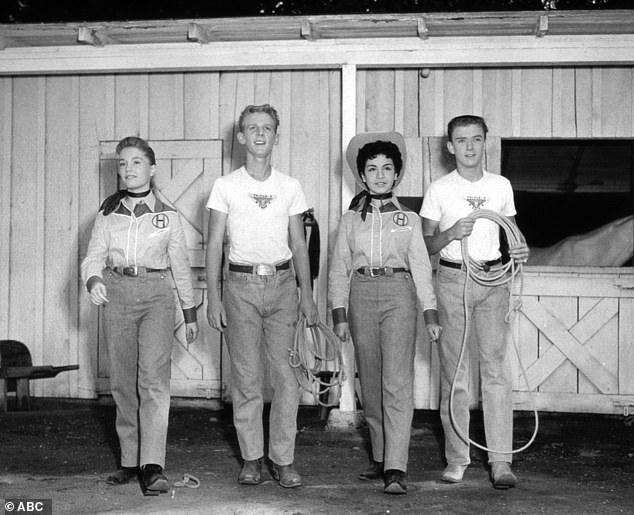